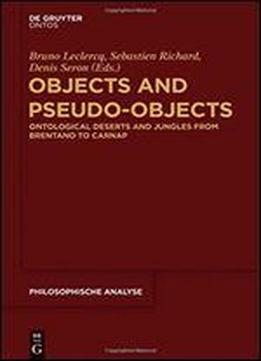 The development of science, logic, mathematics, and psychology in the 19th century made it necessary to introduce a growing number of new entities, of which classical empiricism and strong extensionalism were unable to give a wholly satisfying account. One of the major issues confronting the 20th century philosophers was to identify which of these entities should be rationally accepted as part of the furniture of the world and which should not, and to provide a general account of how the latter are nevertheless subject to true predication. The 13 original essays collected in this volume explore some of the main approaches to this issue in the 20th century, including Brentano, Meinong, Husserl, Carnap, Frege, Twardowski, Kotarbinski, Nicolai Hartmann, and realist phenomenologistsWhich entities should be accepted as part of the furniture of the world, and which not? What are "pseudo-objects," if they are not properly objects? This collection explores the answers given to these questions by some key philosophers throughout the 20th century. It brings together essays by leading scholars on a subject of central importance to both metaphysics and the history of philosophy.