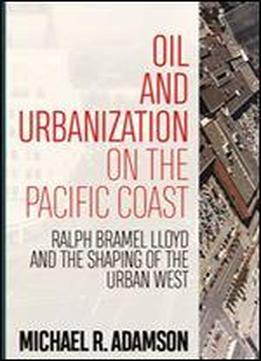 Oil And Urbanization On The Pacific Coast : Ralph Bramel Lloyd And The Shaping Of The Urban West
by Michael R. Adamson / 2018 / English / PDF

Oil and Urbanization on the Pacific Coast tells the story of oilman Ralph Bramel Lloyd, a small business owner who drove the development of one of America's largest oil fields. Lloyd invested his petroleum earnings in commercial real estatemuch of it centered around automobiles and the fuel they requirein several western cities, notably Portland, Oregon. Putting the history of extractive industry in dialogue with the history of urban development, Michael R. Adamson shows how energy is woven into the fabric of modern life, and how the energy capital of Los Angeles exerted far-flung influence in the US West. A contribution to the relatively understudied history of small businesses in the United States, Oil and Urbanization on the Pacific Coast explores issues of t to multiple audiences, such as the competition for influence over urban development waged among local growth machines and outside corporate ts the urban rivalries of a region the importance of public capital in mobilizing the commercial real estate sector during the Great Depression and World War II and the relationships among owners, architects, and contractors in the execution of commercial building projects.