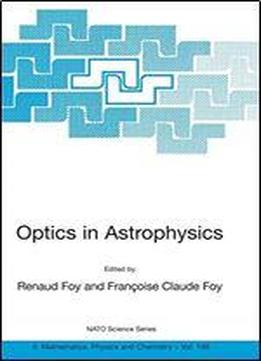 Astrophysics is facing challenging aims such as deep cosmology at redshift higher than 10 to constrain cosmology models, or the detection of exoplanets, and possibly terrestrial exoplanets, and several others. It requires unprecedented ambitious R&D programs, which have definitely to rely on a tight cooperation between astrophysics and optics communities. The book addresses most of the most critical interdisciplinary domains where they interact, or where they will do. A first need is to collect more light, i.e. telescopes still larger than the current 8-10 meter class ones. Decametric, and even hectometric, optical (from UV to IR wavelengths) telescopes are being studied. Whereas up to now the light collecting surface of new telescopes was approximately 4 times that of the previous generation, now this factor is growing to 10 to 100. This quantum leap urges to implement new methods or technologies developed in the optics community, both in academic labs and in the industry. Given the astrophysical goals and technological constraints, new generation adaptive optics with a huge number of actuators and laser guide stars devices have to be developed, from theoretical bases to experimental works. Two other newcomers in observational astrophysics are interferometric arrays of optical telescopes and gravitational wave detectors. Up-to-date reviews of detectors and of spectrographs are given, as well as forefront R&D in the field of optical coatings and of guided optics. Possible new ways to handle photons are also addressed, based on quantum physics. More and more signal processing algorithms are a part and parcel of any modern instrumentation. Thus finally the book gives two reviews about wavefront processing and about image restoration and deconvolution algorithms for ill conditioned cases.