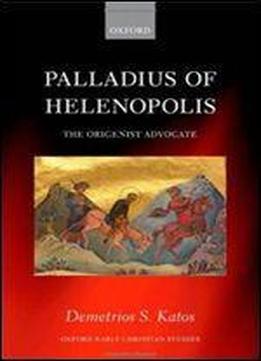 This book is the first monograph devoted to the life, work, and thought of Palladius of Helenopolis (ca. 362-420), an important witness of Christianity in late antiquity. Palladius' Dialogue on the Life of St. John Chrysostom and his Lausiac History are key sources for our knowledge of John Chrysostom's downfall and of the Origenist controversy, and they both provide rich information concerning many notable ecclesiastical personalities such as John Chrysostom, Theophilus of Alexandria, Jerome, Evagrius of Pontus, Melania the Elder, Isidore of Alexandria, and the Tall Brothers. Demetrios S. Katos employs late antique theories of judicial rhetoric and argumentation, theories whose significance is only now becoming apparent to late antique scholars, to elicit new insights from the Dialogue regarding the controversy that resulted in the death of John Chrysostom. He also demonstrates that the Lausiac History deliberately promoted to the imperial court of Pulcheria a spiritual theology that was indebted to his guide Evagrius and more broadly to the legacy of Origen, despite Jerome's recent attacks against both. Palladius emerges from this account not merely as a peripatetic monk, his own preferred self-portrait that has prevailed in most modern accounts, but as an ecclesiastical statesman who passionately supported both the causes and ideas of his associates in the most pressing controversies of his day. The study will also be valuable for scholars of late antiquity working in the areas of asceticism, spirituality, pilgrimage, hagiography, and early Christian constructions of gender, for all of which Palladius' works are important sources.