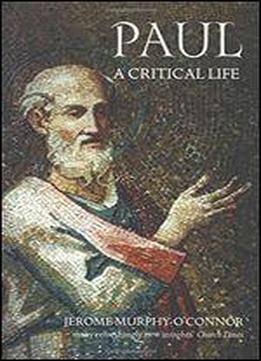 Here Jerome Murphy-O'Connor presents a completely new, and much more vivid and dramatic account of the life of Paul than has ever previously been attempted. From his childhood in Tarsus and his years as a student in Jerusalem to the successes and failures of his ministry, this biography has no peer in terms of its detailed reconstructions of Paul's movements and motives.Traditionally, the Acts of the Apostles has provided the framework for the lives of Paul. In recent years, however, the historical value of the Acts has been called into question. Despite the accuracy of many details, they have been linked in ways which reflect the interests of Luke rather than objective reality. Critical assessment is called for if they are to be incorporated into a life of Paul.The prime source for a reconstruction of the Apostle's life must be his own writings. Recent advances in the study of the letters have brought to light new depths which enables them to be used for biographical purposes. The originality of this book lies in the combination of these two approaches, which are reinforced by close attention to the social and cultural aspects of Paul's ministry as revealed by archaeology and contemporary texts and it transforms a fountain of theological ideas into ahuman being.