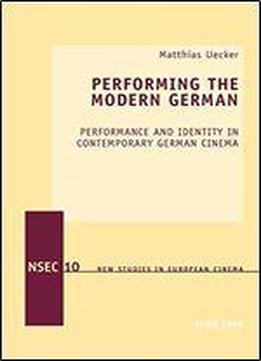 Since the late 1990s, German cinema has gone through a period of astonishing productivity and success that has made it the focus of scholarly analysis once more. What can contemporary German cinema tell us about current German society and its problems? What are the distinguishing features of filmmaking in Germany today?&ltBR> This book analyses the representation of individual and collective behaviour in post-unification German cinema. It looks at performances of gender, ethnicity and nationality in a wide range of contemporary German films. Using Performance Theory as a framework, the book discusses how modern German identities are presented as conformist, liberating or subversive responses to external challenges. &ltBR> Theoretical considerations regarding the efficacy of performance and the dialectical relationship between transgression, resistance and normalization form the background for an analysis that investigates contemporary German films in terms of their function within the restructuring of post-unification German society.