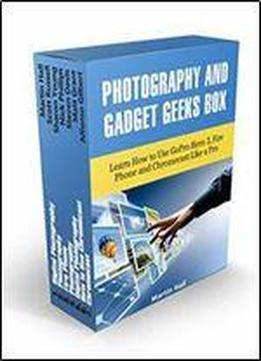 Photography And Gadget Geeks Box Set: Learn How To Use Gopro Hero 3, Fire Phone And Chromecast Like A Pro
by Martin Hall / 2017 / English / PDF

BOOK #1: Digital Photography: Mastering Aperture, Shutter Speed, ISO and Exposure While the physical act of snapping a photograph poses no problem for even the most fledgling of photographers, making the image appear as you imagined in your mind can often present more of a challenge. Understanding how the concept of exposure operates in this process is absolutely essential, but can often prove daunting to those just starting to delve into the world of capturing images. BOOK #2: Photography: 22 Amazing Tips How to Use GoPro Hero 3 and GoPro Hero 3+ Cameras Introduce yourself to the single greatest photography phenomenon since the advent of digital picture taking. GoPro cameras are revolutionizing the way we look at video and still photography. Unlike complex DSLR cameras, the GoPro is designed to be easy to use and still provide great features and functionality. This guide is your introduction to taking pictures that are more exciting than anything youve ever captured before. BOOK #3: Fire Phone: The Best User Guide for Amazon Fire Phone. Find out the Essentials of its System and the Last Hints and Tricks Amazon is known globally for its eBook readers and large online store. Last year, the company has boldly released the Amazon Fire Phone in the middle of 2014. This smartphone release was not sudden, as Amazon had been hinting at an interest in releasing a smartphone based on its own unique platform for at least two years prior to the actual release of the Fire Phone. BOOK #4: Photography: The Ultimate Beginner's Guide to Start Taking Photos Like a Pro Photography is a fascinating hobby, and has become exceedingly popular in current times. With new technology such as digital cameras that can easily be used by the amateur photographer, it is easier for the photographer to take professional looking photographs after some basic practice. In order to do so, it is important to understand some basics of photography. BOOK #5: Digital Photography: 39 Methods to Quick Mastering of Digital Photography with Creative Photo Ideas Photography is a common passion and for many digital photography just won't hold the same impact as film. For the same reasons digital photography is also much more user friendly. Digital photographers don't have to get it right in the lens with so many ways of digitally manipulating images it's ok not to get each shot perfect. As social media has shown us even a camera phone can give you great images without the expense of a professional camera. BOOK #6: How to Use Chromecast: The Ultimate Guide on How to Use Chromecast Google has simply done a lot in helping to simplify access and life online. From the use of emailing to the use of online and cloud storage to access to news and digital maps, the entire processes keeps getting better by the day. New in the Cyber search horizon is the advent of a new device that has taken the society by storm. Chromecast has been in the Cyber market now for just about two years. This very small device has taken the reigns of control in many homes today. BOOK #7: Chromecast: The Best Media Streamer for Enjoying Online Entertainment in Your Home The Google Chromecast is a truly powerful device that will turn your television into an Internet content powerhouse! The second generation Chromecast was released in the last half of 2015 and now offers increased speed, reliability, and mobility. If youve been considering a device that can take your regular, boring television, and turn it into a smart television, then the Chromecast is one device that you should consider.