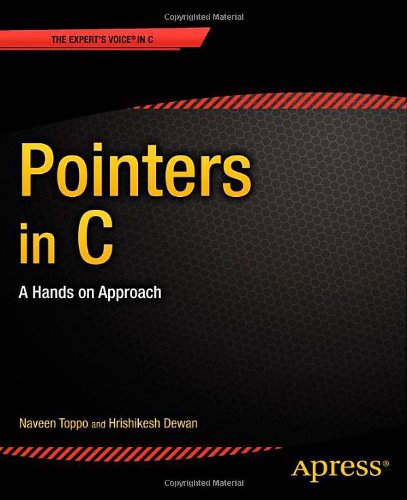 Pointers In C: A Hands On Approach
by Hrishikesh Dewan / 2013 / English / PDF

Pointers in C provides a resource for professionals and advanced students needing in-depth coverage with hands on coverage of pointer basics and advanced features, which helps programmers in wielding the full potential of pointers. In spite of its vast usage, understanding and proper usage of pointers remains a significant problem. This book’s aim is to first introduce the basic building blocks such as elaborate details about memory, the compilation process (parsing/preprocessing/assembler/object code generation), the runtime memory organization of an executable and virtual memory. These basic building blocks will help both beginners and advanced readers to grasp the notion of pointers very easily and clearly. The book is enriched with several illustrations, pictorial examples, and code from different contexts (Device driver code snippets, algorithm, and data structures code where pointers are used). Pointers in C contains several quick tips which will be useful for programmers for not just learning the pointer concept but also while using other features of the C language. Chapters in the book are intuitive, and there is a strict logical flow among them and each chapter forms a basis for the next chapter. This book contains every small aspect of pointer features in the C language in their entirety. What you’ll learn The concept of pointers and their use with different data types Basic and advanced features of pointers Concepts of compilers, virtual memory, data structures, algorithms and string processing Concepts of memory and runtime organization Referencing and dereferencing of pointer variables NULL pointers, Dangling pointers, VOID pointers and CONST qualifiers Workings of dynamic data structures Pointers to pointers Triple, and quadrupal pointers Self referential structures, structure padding, and cache based optimization techniques. Who this book is for Professional programmers, advanced students of computer science, and enthusiasts of the C language. Embedded systems programmers will also find the advanced knowledge of pointers offered in this book very helpful.