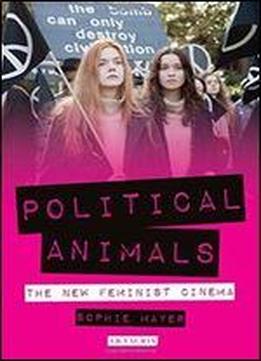 Female filmmakers are hitting the headlines. The last five years have witnessed: the first Best Director Academy Award won by a woman women filmmakers emerging from Saudi Arabia, Brunei, Iran, South Korea, Japan, Paraguay, Uruguay, Burkina Faso and Kenya the first stirrings of a trans cinema, with the release of films that represent transgender characters and their experiences, challenging our understanding of gender and identity feminist porn screened at public festivals and Pussy Riots online documentation of offline activism sending shockwaves around the world. Political Animals argues that a new wave of feminist cinema is speaking to a new audience hungry for intersectional accounts of women in the public sphere that are missing in the mainstream. It reveals how innovative production and distribution strategies are responding to urgent political situations (resulting in colourful guerrilla aesthetics exemplified in the rough, D.I.Y, online videos made by Pussy Riot, but equally found in recent documentaries and features by established filmmakers too) and tunes in to the transnational, transgenerational conversations that are taking place between filmmakers such as Sally Potter, Claire Denis, Barbara Hammer, Mania Akbari, Haifaa al-Mansour, Emily Jacir, Andrea Arnold and Clio Barnard. Courageous and complex, the new feminist cinema is a political animal that, while laying claim to the public sphere as its own, refuses to be domesticated by it.