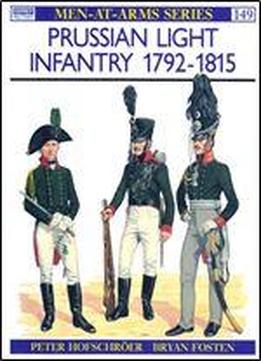 The Prussian light infantry branch was founded in the reign of Frederick the Great (1740-1786) and continued to develop from then onwards. It was the light troops of the Austrian army, the Croatian border soldiers, which so impressed Frederick in the Seven Years War that he considered it necessary to create an effective counter-force. Initially, there was a degree of reluctance amongst certain sections of the army towards this formation of light infantry. However, the Fusilier Battalions came to be regarded as elite formations, being well-trained, disciplined and carefully selected men led by young, fit and intelligent officers. This book described in detail the uniforms, organisation, training and weapons of this spectacular force.