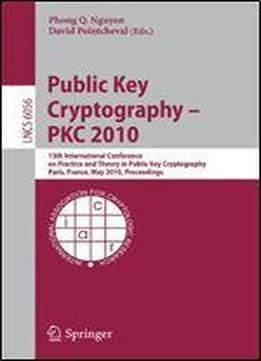 The 13th International Conference on Practice and Theory in Public Key Cryp- ' tography(PKC2010)washeldMay26-28,2010,attheEcoleNormaleSup' erieure (ENS) in Paris, France. PKC 2010 was sponsored by the International Associ- ' ation for Cryptologic Research (IACR), in cooperation with the Ecole Normale Sup' erieure (ENS) and the Institut National de Recherche en Informatique et en Automatique (INRIA). The General Chairs of the conference were Michel Abdalla and Pierre-Alain Fouque. The conference received a record number of 145 submissions and each s- missionwas assignedto at least 3 committee members. Submissions co-authored by members of the Program Committee were assigned to at least ?ve comm- tee members. Due to the large number of high-quality submissions, the review process was challenging and we are deeply grateful to the 34 committee m- bers and the 163 external reviewers for their outstanding work. After extensive discussions, the Program Committee selected 29 submissions for presentation during the conference and these are the articles that are included in this v- ume. The best paper was awardedto Petros Mol and Scott Yilek for their paper "Chosen-Ciphertext Security from Slightly Lossy Trapdoor Functions. " The - view process was run using the iChair software, written by Thomas Baign' eres and Matthieu Finiasz from EPFL, LASEC, Switzerland, and we are indebted to them for letting us use their software. The program also included two invited talks: it was a great honor to have Daniele Micciancio and Jacques Stern as invited speakers.