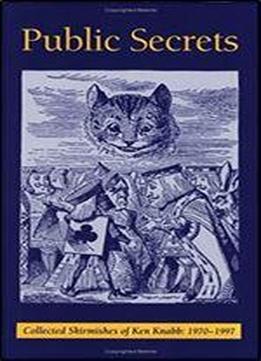 Literary Nonfiction. Politics. Critical Theory. The first half of the book consists of two new texts. "The Joy of Revolution" is a series of observations on the problems and possibilities of a global antihierarchical revolution. Beginning with a brief overview of the failure of Bolshevism and the inadequacy of reformism, it examines the pros and cons of a wide range of radical tactics, then concludes with some speculations on what a liberated society might be like. "Confessions of a Mild-Mannered Enemy of the State" is largely concerned with Knabb's situationist activities, but it also includes reminiscences of the sixties counterculture and accounts of his Zen practice and other later ventures. The second half of the book contains virtually all of Knabb's previous publications. Beginning with his 1970 disruption of a Gary Snyder poetry reading, it includes critiques of the New Left and the counterculture accounts of situationist groups, tactics and scandals translations of several French texts an appreciation of the great writer and social critic, Kenneth Rexroth pamphlets, posters, comics and articles on Wilhelm Reich, radical Buddhists, Japanese anarchists, Chinese dissidents, the 1970 Polish revolt, the 1979 Iranian uprising and the widely reproduced Gulf war tract, "The War and the Spectacle." The aim throughout is to bring the real choices into the open and to incite people to make their own radical experiments.