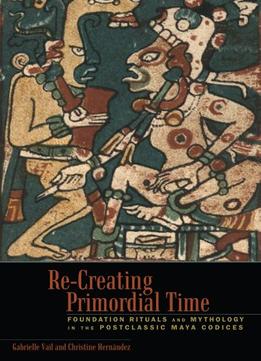 Re-Creating Primordial Time offers a new perspective on the Maya codices, documenting the extensive use of creation mythology and foundational rituals in the hieroglyphic texts and iconography of these important manuscripts. Focusing on both pre-Columbian codices and early colonial creation accounts, Vail and Hernández show that in spite of significant cultural change during the Postclassic and Colonial periods, the mythological traditions reveal significant continuity, beginning as far back as the Classic period. Remarkable similarities exist within the Maya tradition, even as new mythologies were introduced through contact with the Gulf Coast region and highland central Mexico. Vail and Hernández analyze the extant Maya codices within the context of later literary sources such as the Books of Chilam Balam, the Popol Vuh, and the Códice Chimalpopoca to present numerous examples highlighting the relationship among creation mythology, rituals, and lore. Compiling and comparing Maya creation mythology with that of the Borgia codices from highland central Mexico, Re-Creating Primordial Time is a significant contribution to the field of Mesoamerican studies and will be of interest to scholars of archaeology, linguistics, epigraphy, and comparative religions alike.