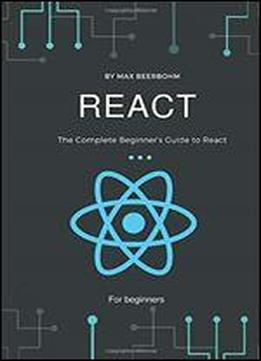 Facebook's React has changed the way we think about web applications and user interface development. Due to its design, you can use it beyond web. A feature known as the Virtual DOM enables this.In this chapter we'll go through some of the basic ideas behind the library so you understand React a little better before moving on.What is React?React is a JavaScript library that forces you to think in terms of components. This model of thinking fits user interfaces well. Depending on your background it might feel alien at first. You will have to think very carefully about the concept of state and where it belongs.Because state management is a difficult problem, a variety of solutions have appeared. In this book, we'll start by managing state ourselves and then push it to a Flux implementation known as Alt. There are also implementations available for several other alternatives, such as Redux, MobX, and Cerebral.React is pragmatic in the sense that it contains a set of escape hatches. If the React model doesn't work for you, it is still possible to revert back to something lower level. For instance, there are hooks that can be used to wrap older logic that relies on the DOM. This breaks the abstraction and ties your code to a specific environment, but sometimes that's the pragmatic thing to do.One of the fundamental problems of programming is how to deal with state. Suppose you are developing a user interface and want to show the same data in multiple places. How do you make sure the data is consistent?Historically we have mixed the concerns of the DOM and state and tried to manage it there. React solves this problem in a different way. It introduced the concept of the Virtual DOM to the masses.Virtual DOM exists on top of the actual DOM, or some other render target. It solves the state manipulation problem in its own way. Whenever changes are made to it, it figures out the best way to batch the changes to the underlying DOM structure. It is able to propagate changes across its virtual tree as in the image above.Virtual DOM PerformanceHandling the DOM manipulation this way can lead to increased performance. Manipulating the DOM by hand tends to be inefficient and is hard to optimize. By leaving the problem of DOM manipulation to a good implementation, you can save a lot of time and effort.React allows you to tune performance further by implementing hooks to adjust the way the virtual tree is updated. Though this is often an optional step.The biggest cost of Virtual DOM is that the implementation makes React quite big. You can expect the bundle sizes of small applications to be around 150-200 kB minified, React included. gzipping will help, but it's still big.