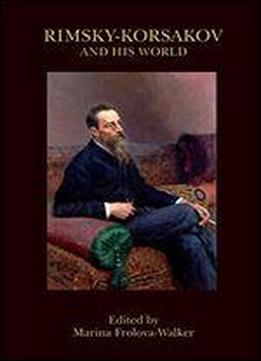 A rare look at the life and music of renowned Russian composer Nikolai Rimsky-Korsakov During his lifetime, Nikolai Rimsky-Korsakov (18441908) was a composer whose work had great influence not only in his native Russia but also internationally. While he remains well-known in Russiawhere many of his fifteen operas and various orchestral pieces are still in the standard repertoirevery little of his work is performed in the West today beyond Scheherezade and arrangements of The Flight of the Bumblebee. In Western writings, he appears mainly in the context of the Mighty Handful, a group of five Russian composers to which he belonged at the outset of his career. Rimsky-Korsakov and His World finally gives the composer center stage and due attention. In this collection, Rimsky-Korsakovs major operas, The Snow Maiden, Mozart and Salieri, and The Golden Cockerel, receive multifaceted exploration and are carefully contextualized within the wider Russian culture of the era. The discussion of these operas is accompanied and enriched by the composers letters to Nadezhda Zabela, the distinguished soprano for whom he wrote several leading roles. Other essays look at more general aspects of Rimsky-Korsakovs work and examine his far-reaching legacy as a professor of composition and orchestration, including his impact on his most famous pupil Igor Stravinsky. The contributors are Lidia Ader, Leon Botstein, Emily Frey, Marina Frolova-Walker, Adalyat Issiyeva, Simon Morrison, Anna Nisnevich, Olga Panteleeva, and Yaroslav Timofeev. The Bard Music Festival Bard Music Festival 2018 Rimsky-Korsakov and His World Bard College August 1012 and August 1719, 2018