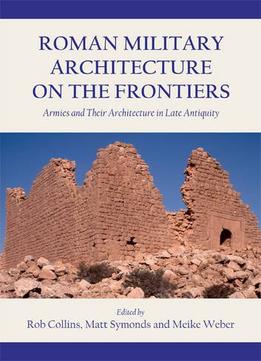 Roman Military Architecture On The Frontiers: Armies And Their Architecture In Late Antiquity
by Rob Collins / 2015 / English / PDF

The Roman army was one of the most astounding organizations in the ancient world, and much of the success of the Roman empire can be attributed to its soldiers. Archaeological remains and ancient texts provide detailed testimonies that have allowed scholars to understand and reconstruct the army's organization and activities. This interest has traditionally worked in tandem with the study of Roman frontiers. Historically, the early imperial period, and in particular the emergence of the frontiers, has been the focus of research. During those investigations, however, the remains of the later Roman army were also frequently encountered, if not always understood. Recent decades have brought a burgeoning interest in not only the later Roman army, but also late antiquity more widely. It is the aim of this volume to demonstrate that while scholars grappling with the late Roman army may want for a rich corpus of inscriptions and easily identifiable military installations, research is revealing a dynamic, less-predictable force that was adapting to a changing world, in terms of both external threats and its own internal structures. The dynamism and ingenuity of the late Roman army provides a breath of fresh air after the suffocating uniformity of its forbears. The late Roman army was a vital and influential element in the late antique empire. Having evolved through the 3rd century and been formally reorganized under Diocletian and Constantine, the limitanei guarded the frontiers, while the comitatenses provided mobile armies that were fielded against external enemies and internal threats. The transformation of the early imperial army to the late antique army is documented in the rich array of texts from the period, supplemented by a perhaps surprisingly rich archaeological record.