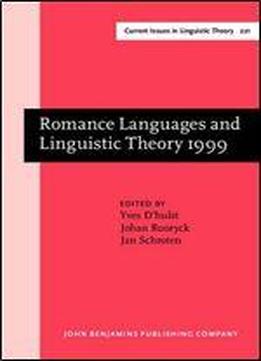 This volume brings together a selection of articles presented at 'Going Romance' 1999. The articles focus on current syntactic and semantic issues in various Romance languages, including Catalan, French, Italian, Spanish, Portuguese, and a number of Northern Italian dialects. A large number of articles focus on negation, which was the theme of the workshop at Going Romance 1999, but other topics investigated include "Wh- in situ," free relatives, exclamatives, lexical decomposition and thematic structure, unaccusative inversion, and temporal existential constructions. Most articles are comparative in nature, relating the different syntactic and semantic properties of both Romance and non-Romance languages to principles of Universal Grammar. The theoretical frameworks adopted in the various articles are diverse, ranging from the Principles and Parameters framework to HPSG.