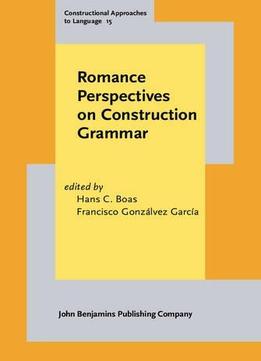 The chapters in this book show how the different flavors of Construction Grammar provide illuminating insights into the syntax, semantics, pragmatics and discourse-functional properties of specific phenomena in Romance languages such as (Castilian) Spanish, French, Romanian, and Latin from a synchronic as well as a diachronic viewpoint.

The phenomena surveyed include the role of constructional meanings in novel verb-noun compounds in Spanish, the relevance of lexicalization for a constructionist analysis of complex prepositions in French, the complementariness of fragments, patterns and constructions as theoretical and explanatory constructs in verb complementation in French, Latin, and Spanish, non-constituent coordination phenomena (e.g. Right Node Raising, Argument Cluster Coordination and Gapping) in Romanian, and variable type framing in Spanish constructions of directed motion in the light of Leonard Talmy’s (2000) typological differences of lexicalization between satellite-framed and verb-framed languages.