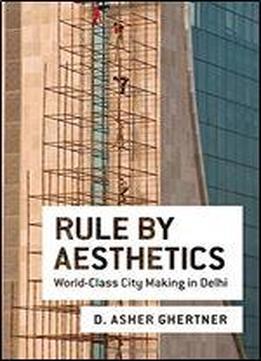 Rule by Aesthetics offers a powerful examination of the process and experience of mass demolition in the world's second largest city of Delhi, India. Using Delhi's millennial effort to become a 'world-class city,' the book shows how aesthetic norms can replace the procedures of mapping and surveying typically considered necessary to administer space. This practice of evaluating territory based on its adherence to aesthetic norms - what Ghertner calls 'rule by aesthetics' - allowed the state in Delhi to intervene in the once ungovernable space of slums, overcoming its historical reliance on inaccurate maps and statistics. Slums hence were declared illegal because they looked illegal, an arrangement that led to the displacement of a million slum residents in the first decade of the 21st century. Drawing on close ethnographic engagement with the slum residents targeted for removal, as well as the planners, judges, and politicians who targeted them, the book demonstrates how easily plans, laws, and democratic procedures can be subverted once the subjects of democracy are seen as visually out of place. Slum dwellers' creative appropriation of dominant aesthetic norms shows, however, that aesthetic rule does not mark the end of democratic claims making. Rather, it signals a new relationship between the mechanism of government and the practice of politics, one in which struggles for a more inclusive city rely more than ever on urban aesthetics, in Delhi as in aspiring world-class cities the world over.