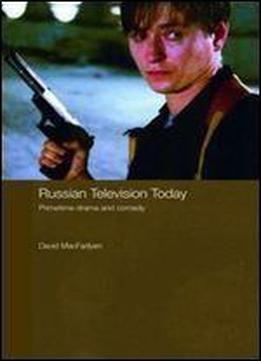 Examining the role of dramatized narratives in Russian television, this book stresses the ways in which the Russian government under Putin use primetime television to express a new understanding of what it means to be Russian, answering key questions of national identity for modern Russians in dealing with their recent history: ‘What really happened to us?’ and, accordingly, ‘Why?’ The book covers important issues in Russian television today, including: the reworking of new ‘national’ on-screen heroes its relationship with classic literature the revisionist portrayal of a romantic portrait of life in the Soviet era the role of thematic elements such as love, fidelity, humour and irony the particularly pressing problem of crime and its representation on screen as Mafia or police adventure, and its political usage by the Putin administration. This book provides a detailed account of the critical issues in contemporary Russian television, relating them to broader social and political developments in Russian society.