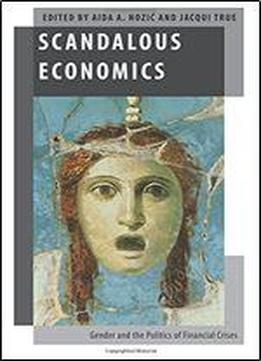 Of all of the lies, fragile alliances, and predatory financial dealings that have been revealed in the wake of the Global Financial Crisis of 2008, we have yet to come to terms with the ways in which structural inequalities around gender and race factor into (and indeed make possible) the current economic order. Scandalous Economics is about "silences" - the astonishing neglect of gender and race in explanations of the Global Financial Crisis. But, it is also about "noises" - the sexual scandals and gendered austerity policies that have relegated public debate, and the crisis itself, into political oblivion. While feminist economists and movements such as Occupy Wall Street have pointed to the distributional inequalities that are an effect of financial deregulation, scholars haven't really grappled with the representational inequalities inherent in the way we view the politics of the market. For example, capitalism won't be made more equitable simply by appointing women to leadership positions within financial firms or corporations. And the next crisis will not be averted if our understandings of gendered inequalities are framed by sexual scandals in media and popular culture. We need to look at the activities and the privileges of the advantaged - the "TED women" of the crisis as much as the victimization of the disadvantaged - to fully grasp the interplay between gender and economy in this fragile age of restoration. Scandalous Economics breaks new ground by doing precisely this. It argues that normalization of the post-GFC economic order in the face of its obvious breakdown(s) has been facilitated by co-optation of feminist and queer perspectives into national and international responses to the crisis. Scandalous Economics builds upon the Occupy movement and other critical analysis of the GFC to comprehensively examine gendered material, ideational and representational dimensions that have served to make the crisis and its effects, 'the new normal' in Europe and America as well as Latin America and Asia.