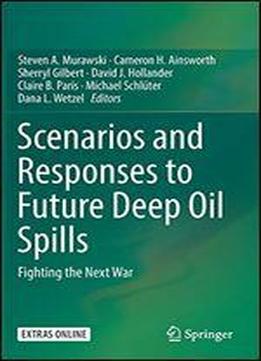 Scenarios And Responses To Future Deep Oil Spills: Fighting The Next War
by Steven A. Murawski / 2019 / English / PDF

It has often been said that generals prepare for the next war by re-fighting the last. The Deepwater Horizon (DWH) oil spill was unlike any previous an underwater well blowout 1,500 meters deep. Much has been learned in the wake of DWH and these lessons should in turn be applied to both similar oil spill scenarios and those arising from frontier explorations by the marine oil industry. The next deep oil well blowout may be at 3,000 meters or even deeper. This volume summarizes regional (Gulf of Mexico) and global megatrends in marine oil exploration and production. Research in a number of key areas including the behavior of oil and gas under extreme pressure, impacts on biological resources of the deep sea, and the fate of oil and gas released in spills is synthesized. A number of deep oil spills are simulated with detailed computer models, and the likely effects of the spills and potential mitigation measures used to combat them are compared. Recommended changes in policies governing marine oil exploration and development are proposed, as well as additional research to close critical and emerging knowledge gaps. This volume synthesizes state-of-the-art research in deep oil spill behavior and response. It is thus relevant for government and industry oil spill responders, policy formulators and implementers, and academics and students desiring an in-depth and balanced overview of key issues and uncertainties surrounding the quest for deep oil and potential impacts on the environment.