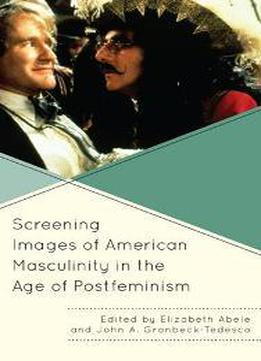 This collection of essays presents a sampling of film and television texts, interrogating images of U.S. masculinity. Rather than using “postfeminist” as a definition of contemporary feminism, this collection uses the term to designate the period from the late 1980s on—as a point when feminist thought gradually became more mainstream. The movies and TV series examined here have achieved a level of sustained attention, from critical acclaim, to mass appeal, to cult status. Instead of beginning with a set hypothesis on the effect of the feminist movement on images of masculinity on film and television, these chapters represent a range of responses, that demonstrate how the conversations within these texts about American masculinity are often open-ended, allowing both male characters and male viewers a wider range of options. Defining the relationship between U.S. masculinity and American feminist movements of the twentieth century is a complex undertaking. The essays collected for this volume engage prominent film and television texts that directly interrogate images of U.S. masculinity that have appeared since second-wave feminism. The contributors have chosen textual examples whose protagonists actively struggle with the conflicting messages about masculinity. These protagonists are more often works-in-progress, acknowledging the limits of their negotiations and self-actualization. These chapters also cover a wide range of genres and decades: from action and fantasy to dramas and romantic comedy, from the late 1970s to today. Taken together, the chapters of Screening Images of American Masculinity in the Age of Postfeminism interrogate “the possible” screened in popular movies and television series, confronting the multiple and competing visions of masculinity not after or beyond feminism but, rather, in its very wake.