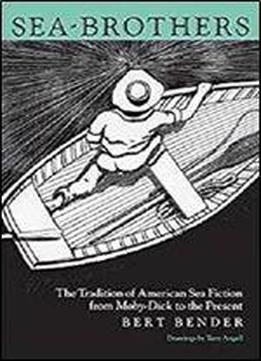 Sea-brothers: The Tradition Of American Sea Fiction From Moby-dick To The Present [kindle Edition]
2015 / English / Kindle

Sea-Brothers offers the most extensive analysis to date of the sea and its meaning in American literature. On the basis of his study of Melville, Crane, London, Hemingway, Matthiessen, and ten lesser-known sea-writers, Bert Bender argues that the tradition of American sea fiction did not end with the opening of the western frontier and the replacement of sailing ships by steamers. Rather, he demonstrates its continuity and vitality, identifying a central vision within the tradition and showing how particular authors draw from, transform, and contribute to it. What is most distinctive about American sea fiction, Bender contends, is its visionary, often mystical, response to the biological world and to man's perceived place in the larger universe. When Melville envisioned the sea as the essential element of life, indeed as life itself, he changed the course of American sea fiction by introducing the relevance of biological thought. But his meditations on the whale and "the ungraspable phantom of life" project a different reality from that envisioned by his successors. In American sea fiction after Melville, the influence of Origin of Species is as powerful as that of Moby Dick or the theme of sailing ships being displaced by steam. The ideal of brotherhood so central to American sea fiction was severely compromised by the biological reality of a competitive, warring nature. Twentieth-century sea fiction has continued to center on the biological world and address the possibility of democratic brotherhood, but the issues were fundamentally changed by Darwin's theories. This book will be a valuable source for students and scholars of American literature and will t readers of sea fiction.