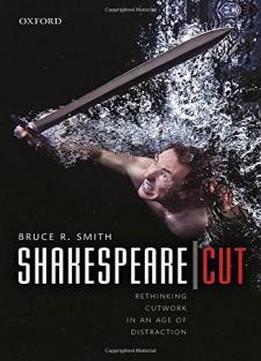 In distracted times like the present, Shakespeare too has been driven to distraction.

considers contemporary practices of cutting up Shakespeare in stage productions, videogames, book sculptures, and YouTube postings, but it also takes the long view of how Shakespeare's texts have been cut apart in creative ways beginning in Shakespeare's own time. The book's five chapters consider cuts, cutting, and cutwork from a variety of angles: (1) as bodily experiences, (2) as essential parts of the process whereby Shakespeare and his contemporaries crafted scripts, (3) as units in perception, (4) as technologies situated at the interface between "figure" and "life," and (5) as a fetish in western culture since 1900. Printed here for the first time are examples of the cut-ups that William S. Burroughs and Brion Guysin carried out with Shakespeare texts in the 1950s. Bruce R. Smith's original analysis is accompanied by twenty-four illustrations, which suggest the multiple media in which cutwork with Shakespeare has been carried out.