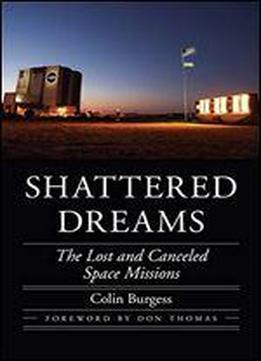 Shattered Dreams delves into the personal stories and recollections of several men and women who were in line to fly a specific or future space mission but lost that opportunity due to personal reasons, mission cancellations, or even tragedies. While some of the subjects are familiar names in spaceflight history, the accounts of others are told here for the first time. Colin Burgess features spaceflight candidates from the United States, Russia, Indonesia, Australia, and Great Britain. Shattered Dreams brings to new life such episodes and upheavals in spaceflight history as the saga of the three Apollo missions that were cancelled due to budgetary constraints and never flew NASA astronaut Patricia Hilliard Robertson, who died of burn injuries after her airplane crashed before she had a chance to fly into space and a female cosmonaut who might have become the first journalist to fly in space. Another NASA astronaut was preparing to fly an Apollo mission before he was diagnosed with a disqualifying illness. There is also the amazing story of the pilot who could have bailed out of his damaged aircraft but held off while heroically avoiding a populated area and later applied to NASA to fulfill his cherished dream of becoming an astronaut despite having lost both legs in the accident. These are the incredibly human stories of competitive realists fired with an unquenchable passion. Their accounts reveal in their own wordsand those of others close to themhow their shared ambition would go awry through personal accidents, illness, the Challenger disaster, death, or other circumstances.