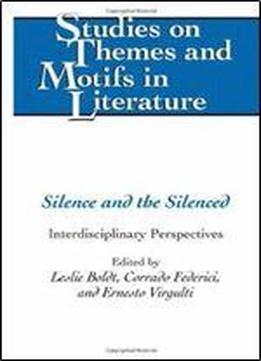 Silence And The Silenced: Interdisciplinary Perspectives (studies On Themes And Motifs In Literature)
by Leslie Boldt / 2013 / English / PDF

Silence and the Silenced: Interdisciplinary Perspectives comprises a collection of essays from North American and European scholars who examine the various ways in which the theme of silence is developed in literary narratives as well as in such visual media as photography, film, painting, and architecture. The questions of silence and the presence or absence of voice are also explored in the arena of performance, with examples relating to pantomime and live installations. As the book title indicates, two fundamental aspects of silence are investigated: silence freely chosen as a means to deepen meditation and inner reflection and silence that is imposed by external agents through various forms of political repression and censorship or, conversely, by the self in an attempt to express revolt or to camouflage shame. The approaches to these questions range from the philosophical and the psychological to the rhetorical and the linguistic. Together, these insightful reflections reveal the complexity and profundity that surround the function of silence and voice in an aesthetic and social context. Note: My nickname -