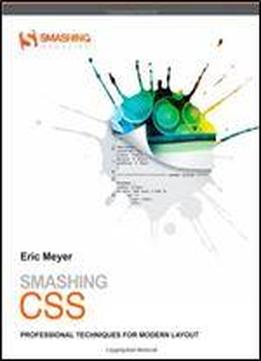 PROFESSIONAL TECHNIQUES FOR MODERN LAYOUT Smashing CSS takes you well beyond the basics, covering not only the finer points of layout and effects, but introduces you to the future with HTML5 and CSS3. Very few in the industry can show you the ins and outs of CSS like Eric Meyer and inside Smashing CSS Eric provides techniques that are thorough, utterly useful, and universally applicable in the real world. From choosing the right tools, to CSS effects and CSS3 techniques with jQuery, Smashing CSS is the practical guide to building modern web layouts. With Smashing CSS you will learn how to: Throw elements offscreen/hide them Create body/HTML backgrounds in XHTML Usemore than 15 layout techniques including clearfix, two/three simple columns, faux columns, One True Layout, Holy Grail, em-based layout, fluid grids, sticky footers, and more Use a variety of CSS effects including CSS popups, boxpunching, rounded corners, CSS sprites, Sliding Doors, Liquid Bleach, ragged floats, and more Apply CSS table styling including using thead, tfoot, and tbody, row headers, column-oriented styling (classes) styling data tables with jQuery, tables to graphs, tables to maps and more Use CSS3 elements including rounded corners, multiple backgrounds, RGBA, using jQuery to do CSS3 selections and so much more. Eric Meyer is an internationally recognized expert on the subjects of HTML, CSS, and Web standards, and has been working on the Web since 1993. Smashing CSS is for developers who already have some experience with CSS and JavaScript and are ready for more advanced techniques. Smashing Magazine (smashingmagazine.com) is one of the world's most popular web design sites. True to the Smashing mission, the Smashing Magazine book series delivers useful and innovative information to Web designers and developers.