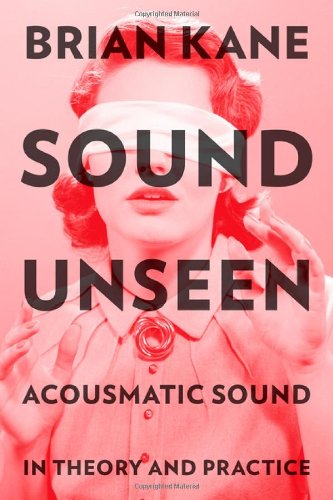 Sound coming from outside the field of vision, from somewhere beyond, holds a privileged place in the Western imagination. When separated from their source, sounds seem to manifest transcendent realms, divine powers, or supernatural forces. According to legend, the philosopher Pythagoras lectured to his disciples from behind a veil, and two thousand years later, in the age of absolute music, listeners were similarly fascinated with disembodied sounds, employing various techniques to isolate sounds from their sources. With recording and radio came spatial and temporal separation of sounds from sources, and new ways of composing music. Sound Unseen: Acousmatic Sound in Theory and Practice explores the phenomenon of acousmatic sound. An unusual and neglected word, "acousmatic" was first introduced into modern parlance in the mid-1960s by avant garde composer of musique concrète Pierre Schaeffer to describe the experience of hearing a sound without seeing its cause. Working through, and often against, Schaeffer's ideas, Brian Kane presents a powerful argument for the central yet overlooked role of acousmatic sound in music aesthetics, sound studies, literature, philosophy and the history of the senses. Kane investigates acousmatic sound from a number of methodological perspectives – historical, cultural, philosophical and musical – and provides a framework that makes sense of the many surprising and paradoxical ways that unseen sound has been understood. Finely detailed and thoroughly researched, Sound Unseen pursues unseen sounds through a stunning array of cases – from Bayreuth to Kafka's "Burrow," Apollinaire to Zizek, music and metaphysics to architecture and automata, and from Pythagoras to the present – to offer the definitive account of acousmatic sound in theory and practice. The first major study in English of Pierre Schaeffer's theory of "acousmatics," Sound Unseen is an essential text for scholars of philosophy of music, electronic music, sound studies, and the history of the senses.