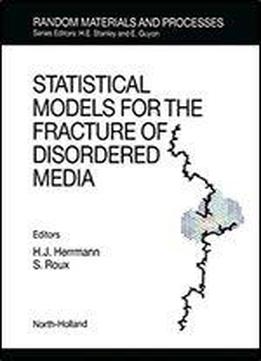 Since the beginning of the century the technological desire to master the fracture of metals, concrete or polymers has boosted research and has left behind an overwhelming amount of literature. In a field where it seems difficult to say anything simple and new, the editors and authors of this book have managed to do just that. The approach to fracture taken here was not conceived by mechanical engineers or material scientists. It is essentially the by-product of exciting developments that have occurred in the last ten to fifteen years within a branch of theoretical physics, called statistical physics. Concepts such as "percolation" and "fractals" as models for the properties of fracture are not often considered by engineers. A particular aim of this volume is to emphasize the fundamental role disorder plays in the breaking process. The main scope of the volume is pedagogical and is at the same time an overview of fracture mechanics for physicists and an introduction to new concepts of statistical physics for mechanics and engineers. To this end the first half of the book consists of introductory chapters and the second half contains the results that have emerged from this new approach.