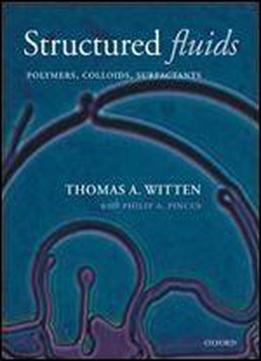 Over the last thirty years, the study of liquids containing polymers, surfactants, or colloidal particles has developed from a loose assembly of facts into a coherent discipline with substantial predictive power. These liquids expand our conception of what condensed matter can do. Such structured-fluid phenomena dominate the physical environment within living cells. This book teaches how to think of these fluids from a unified point of view showing the far-reaching effects of thermal fluctuations in producing forces and motions. Keeping mathematics to a minimum, the book seeks the simplest explanations that account for the distinctive scaling properties of these fluids. An example is the growth of viscosity of a polymer solution as the cube of the molecular weight of the constituent polymers. Another is the hydrodynamic radius of a colloidal aggregate, which remains comparable to its geometrical radius even though the density of particles in the aggregate becomes arbitrarily small. The book aims for a simplicity, unity and depth not found in previous treatments, and includes numerous figures, tables and problems. It will be an ideal textbook for teaching undergraduates in physical science how to understand soft matter, but will also be of interest to industrial scientists, who want to gain a broader understanding of soft matter systems.