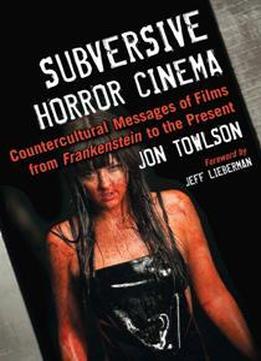 Horror cinema flourishes in times of ideological crisis and national trauma–the Great Depression, the Cold War, the Vietnam era, post-9/11; this book argues that a succession of filmmakers working in horror–from James Whale to Jen and Sylvia Soska–have used the genre, and the shock value it affords, to challenge the status quo during these times. Spanning the decades from the 1930s onwards this critical text examines the work of producers and directors as varied as George A. Romero, Pete Walker, Michael Reeves, Herman Cohen, Wes Craven and Brian Yuzna–and the ways in which films like Frankenstein (1931), Cat People (1942), The Woman (2011) and American Mary (2012) can be considered "subversive."

"Brain candy for the critical horror fan… strikes a perfect balance between rigorous and readable."

"A fascinating and thought-provoking book, not only from a film history viewpoint, but as a work of social record too… intelligent, well written and insightful… highly recommended."