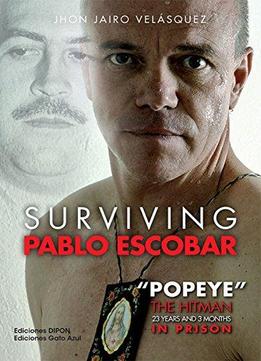 I've begged God for forgiveness, but I won't know till the day I die if He has truly forgiven me …

I've paid my dues to society by serving my long sentence, but perhaps I haven't earned His indulgence …

Oh my God, I've lived so many different lives!

I survived Pablo Escobar Gaviria, El Patrón (The Boss), and it was the strength of his indomitable spirit that kept me going all these years; I don't quite know how or why. I still feel his presence every day of my existence. The Medellin cartel's crimes weigh as heavily on my shoulders today as they did yesterday. My youth, wasted in crime, became the sword that now hangs over my graying head.

To the world, I'll always be known by my alias, Popeye, the fearsome hitman of the Medellin cartel, Pablo Escobar Gaviria's right-hand man … How can I make you understand I'm a new man … that twenty-three years behind bars in that hellhole have transformed the person I once was.

Now the freedom I yearned for is vanishing in the murderous hands of my enemies. Perhaps fate has extended my life only to toy with me by preparing my own dying moments.

I survived in captivity but I don't know if I'll be able to live in freedom … A prisoner of my own mind, I'll try to fight to find some peace …

It's very cold … now it's August 2014. I'm one step from freedom and I'm still breathing … still here in this dimly lit cell in the maximum security prison in Cómbita, Boyacá.