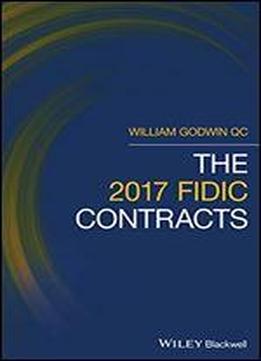 Provides a clear and comprehensive guide to the 2017 FIDIC contractswritten by a member of the FIDIC Updates Task Group FIDIC contracts are the most widely used engineering standard form contracts internationally but until 2017 the three main forms (the Red, Yellow and Silver Books) had not been amended or updated for nearly two decades, since the first editions were published in 1999. Written by a specialist lawyer who was member of the FIDIC Updates Task Group responsible for writing the new contracts, this book examines in detail the many substantial changes they have introduced. After providing an overview the contracts are examined clause by clause with the aim of showing how each compares and contrasts with the others and how the second editions compare and contrast with the first. The first chapter describes how the Red, Yellow and Silver Books evolved from earlier contract forms and the distinctive characteristics of each, before providing an overview of the updates, including new potential risks for both Employer and Contractor, and then examining, in the second chapter, key general provisions such as the new rules on notices and limitation of liability. Chapter 3 examines the enhanced role of the Engineer in the Red and Yellow Books/Employers Representatives function in the Silver including the new procedure for determinations as well as the Employers obligations and contract administration. The Contractors obligations are considered in chapter 4 while chapter 5 examines his responsibility for design in the Yellow and Silver Books. Chapters 6 to 14 deal respectively with plant, materials and workmanship and staff and labour time-related provisions in the three contracts including extensions of time, and the Employers right to suspend the works testing on and after completion and the Employers taking over of the works defects after taking over, acceptance of the works and unfulfilled obligations measurement (in the Red Book), the Contract Price and payment the new variations regime and adjustments to the Price termination and suspension care of the works and indemnities and Exceptional Events (previously, Force Majeure). An important feature of the new contracts is their increased emphasis on clarity in the claims process and on dispute avoidance. These topics are examined in the final two chapters, 15 and 16, which deal respectively with the new claims and dispute resolution provisions of the 2017 forms. FIDIC contracts are the most widely used standard forms of contract for international engineering and construction projects Provides a clear and comprehensive guide to the 2017 FIDIC Red, Yellow and Silver Books Written by a senior specialist lawyer and member of the FIDIC 2017 Updates Task Group responsible for writing the new contracts Accessible to those with little or no familiarity with FIDIC contracts The 2017 FIDIC Contracts is an important guide for anyone engaged in international projects, including employers, contractors, engineers, lawyers, suppliers and project financiers/sponsors.