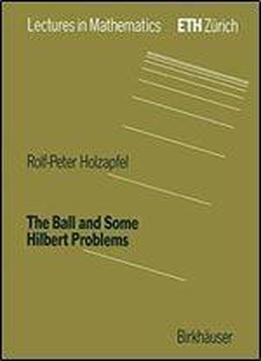 As an ting object of arithmetic, algebraic and analytic geometry the complex ball was born in a paper of the French Mathematician E. PICARD in 1883. In recent developments the ball finds great t again in the framework of SHIMURA varieties but also in the theory of diophantine equations (asymptotic FERMAT Problem, see ch. VI). At first glance the original ideas and the advanced theories seem to be rather disconnected. With these lectures I try to build a bridge from the analytic origins to the actual research on effective problems of arithmetic algebraic geometry. The best motivation is HILBERT'S far-reaching program consisting of 23 prob lems (Paris 1900) " . . . one should succeed in finding and discussing those functions which play the part for any algebraic number field corresponding to that of the exponential function in the field of rational numbers and of the elliptic modular functions in the imaginary quadratic number field". This message can be found in the 12-th problem "Extension of KRONECKER'S Theorem on Abelian Fields to Any Algebraic Realm of Rationality" standing in the middle of HILBERTS'S pro gram. It is dedicated to the construction of number fields by means of special value of transcendental functions of several variables. The close connection with three other HILBERT problems will be explained together with corresponding advanced theories, which are necessary to find special effective solutions, namely: 7. Irrationality and Transcendence of Certain Numbers 21.