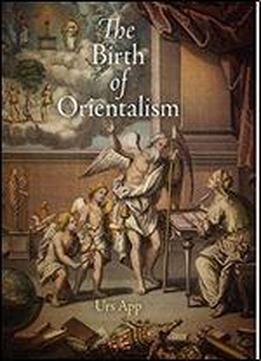 Modern Orientalism is not a brainchild of nineteenth-century European imperialists and colonialists, but, as Urs App demonstrates, was born in the eighteenth century after a very long gestation period defined less by economic or political motives than by religious ideology. Based on sources from a dozen languages, many unavailable in English, The Birth of Orientalism presents a completely new picture of this protracted genesis, its underlying dynamics, and the Western discovery of Asian religions from the sixteenth to the nineteenth century. App documents the immense influence of Japan and China and describes how the Near Eastern cradle of civilization moved toward mother India. Moreover, he shows that some of India's purportedly oldest texts were products of eighteenth-century European authors. Though Western engagement with non-Abrahamic Asian religions reaches back to antiquity and can without exaggeration be called the largest-scale religiocultural encounter in history, it has so far received surprisingly little attention-which is why some of its major features and their role in the birth of modern Orientalism are described here for the first time. The study of Asian documents had a profound impact on Europe's intellectual makeup. Suddenly the Bible had much older competitors from China and India, Sanskrit threatened to replace Hebrew as the world's oldest language, and Judeo-Christianity appeared as a local phenomenon on a dramatically expanded, worldwide canvas of religions and mythologies. Orientalists were called upon as arbiters in a clash that involved neither gold and spices nor colonialism and imperialism but, rather, such fundamental questions as where we come from and who we are: questions of identity that demanded new answers as biblical authority dramatically waned.