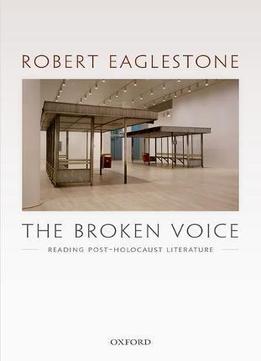 'Which writer today is not a writer of the Holocaust?' asked the late Imre Kertesz, Hungarian survivor and novelist, in his Nobel acceptance speech: 'one does not have to choose the Holocaust as one's subject to detect the broken voice that has dominated modern European art for decades'. Robert Eaglestone attends to this broken voice in literature in order to explore the meaning of the Holocaust in the contemporary world, arguing, again following Kertesz, that the Holocaust will 'remain through culture, which is really the vessel of memory'. Drawing on the thought of Hannah Arendt, Eaglestone identifies and develops five concepts–the public secret, evil, stasis, disorientalism, and kitsch–in a range of texts by significant writers (including Kazuo Ishiguro, Jonathan Littell, Imre Kertesz, W. G. Sebald, and Joseph Conrad) as well as in work by victims and perpetrators of the Holocaust and of atrocities in Africa. He explores the interweaving of complicity, responsibility, temporality, and the often problematic powers of narrative which make up some part of the legacy of the Holocaust.