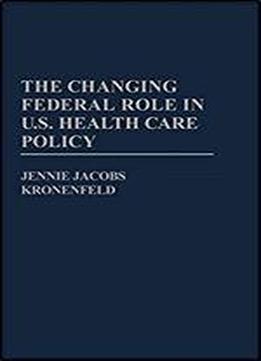 Health care in the United States at the end of the 20th century occupies a completely different place in the economy, in the public consciousness, and in its impact on government, than it did at the beginning of the century, or even in the early years of the Clinton Administration. Health care is now a multi-billion dollar industry one that consumes more than 15 percent of the nation's GNP. Citizens now regard health care as essential to the quality of their lives, and a steady stream of new medications and procedures point to ways to extend the lives of our aging population and restore those injured on or off the job. At the same time, the changing patterns of health care have stirred a national debate over the growth of managed care and the role that government can play in providing solid health care standards?a medical safety net?within tightening budgetary restraints. This book explores the role of the federal government in health care policy development from the years of the Founding Fathers to the present. Kronenfeld reviews the key features of the American health care system, its infrastructure, and federal legislative process and outcomes in the health care arena. The current situation in health care is examined, with particular attention given to the attempt at major reform in the first Clinton administration, and to the modest changes that were ultimately passed. She closes with an examination of the future of health care and the role of government, emphasizing how current health care issues and concerns may set the stage for a changed federal role in funding and delivery of health care services in the next century. This comprehensive examination of the role of government in the health care system will be of great interest to students and researchers of public policy and the social aspects of American health care.