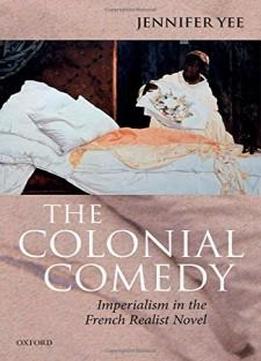 Nineteenth-century French realism focuses on metropolitan France, with Paris as its undisputed heart. Through Jennifer Yee's close reading of the great novelists of the French realist and naturalist canon--Balzac, Flaubert, Zola, Maupassant--

reveals that the colonies play a role at a distance even in the most apparently metropolitan texts. In what Edward Said called "geographical notations" of race and imperialism, the presence of the colonies off-stage is apparent as imported objects, colonial merchandise, and individuals whose colonial experience is transformative. Indeed, the realist novel registers the presence of the emerging global world-system through networks of importation, financial speculation, and immigration as well as direct colonial violence and power structures. The literature of the century responds to the last decades of French slavery, and direct colonialism (notably in Algeria), but also economic imperialism and the extension of French influence elsewhere. Far from imperialist triumphalism, in the realist novel exotic objects are portrayed as fake or mass-produced for the growing bourgeois market, while economic imperialism is associated with fraud and manipulation. The deliberate contrast of colonialism and exoticism within the metropolitan novel, and ironic distancing of colonial narratives, reveal the realist mode to be capable of questioning its own epistemological basis.

argues for the existence in the nineteenth century of a critical orientalism characterized by critique of its own discursive foundations. Using the tools of literary analysis within a materialist approach,

opens up the domestic Paris-Provinces axis to signifying chains pointing towards the colonial space.