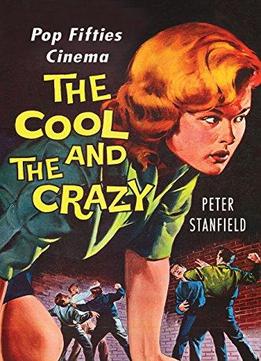 The Cool And The Crazy: Pop Fifties Cinema
by Peter Stanfield / 2015 / English / PDF

Such movie taglines were common in the 1950s, as Hollywood churned out a variety of low-budget pictures that were sold on the basis of their sensational content and topicality. While a few of these movies have since become canonized by film fans and critics, a number of the era’s biggest fads have now faded into obscurity. The Cool and the Crazy examines seven of these film cycles, including short-lived trends like boxing movies, war pictures, and social problem films detailing the sordid and violent life of teenagers, as well as uniquely 1950s takes on established genres like the gangster picture.

Peter Stanfield reveals how Hollywood sought to capitalize upon current events, moral panics, and popular fads, making movies that were “ripped from the headlines” on everything from the Korean War to rock and roll. As he offers careful readings of several key films, he also considers the broader historical and commercial contexts in which these films were produced, marketed, and exhibited. In the process, Stanfield uncovers surprising synergies between Hollywood and other arenas of popular culture, like the ways that the fashion trend for blue jeans influenced the 1950s Western.

Delivering sharp critical insights in jazzy, accessible prose, The Cool and the Crazy offers an appreciation of cinema as a “pop” medium, unabashedly derivative, faddish, and ephemeral. By studying these long-burst bubbles of 1950s “pop,” Stanfield reveals something new about what films do and the pleasures they provide.