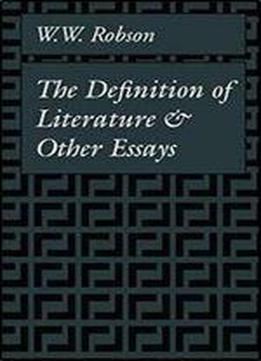 The Definition Of Literature And Other Essays
by W. W. Robson / 2011 / English / PDF

Professor W. W. Robson is an eminent literary critic, best known for his work on nineteenth- and twentieth-century literature. His natural form of expression is the critical essay, and this book comprises a collection of essays on a variety of topics written in plain and straightforward language. What holds the collection together is a preoccupation with critical theory deployed in the first four essays. In 'The definition of literature', the title essay, the discussion turns on what kind of definition is to be recommended rather than on a particular formulation. 'On liberty of interpreting' examines the much-canvassed question of the relevance or otherwise to criticism of the author's intentions. In another essay it is argued that one widely favoured account of literary appraisal - that it deals with literature as literature - is in fact empty, while in an essay on the novel the author raises the question of how prose fiction can be thought of as being true to life. From these general questions Professor Robson moves on to consider particular works and authors in the light of the preceding discussion of critical principles. Essays on Treasure Island, Kidnapped and The Wind in the Willows are followed by surveys of Tennyson and Robert Frost, while the last four essays discuss literary questions by analysing what has been written about them by four distinguished poet critics: Hopkins, T. S. Eliot, I. A. Richards, and Yvor Winters. The overall aim of the volume is to take conversation about prose and poetry out of the limited and specialized literary or academic worlds in which it so often takes place and open it up to a broader world of reflective people, whoever and wherever they happen to be.