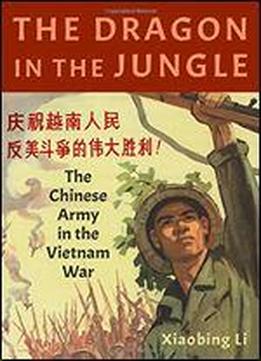 The Dragon In The Jungle: The Chinese Army In The Vietnam War
by Xiao-Bing Li / 2020 / English / PDF

Western historians have long speculated about Chinese military intervention in the Vietnam War. It was not until recently, however, that newly available international archival materials, as well as documents from China, have indicated the true extent and level of Chinese participation in the conflict of Vietnam. For the first time in the English language, this book offers an overview of the operations and combat experience of more than 430,000 Chinese troops in Indochina from 1968-73. The Chinese Communist story from the "other side of the hill" explores one of the missing pieces to the historiography of the Vietnam War. The book covers the chronological development and Chinese decision-making by examining Beijing's intentions, security concerns, and major reasons for entering Vietnam to fight against the U.S. armed forces. It explains why China launched a nationwide movement, in Mao Zedong's words, to "assist Vietnam and resist America" in 1965-72. It details PLA foreign war preparation, training, battle planning and execution, tactical decisions, combat problem solving, political indoctrination, and performance evaluations through the Vietnam War. International Communist forces, technology, and logistics proved to be the decisive edge that enabled North Vietnam to survive the U.S. Rolling Thunder bombing campaign and helped the Viet Cong defeat South Vietnam. Chinese and Russian support prolonged the war, making it impossible for the United States to win. With Russian technology and massive Chinese intervention, the NVA and NLF could function on both conventional and unconventional levels, which the American military was not fully prepared to face. Nevertheless, the Vietnam War seriously tested the limits of the communist alliance. Rather than improving Sino-Soviet relations, aid to North Vietnam created a new competition as each communist power attempted to control Southeast Asian communist movement. China shifted its defense and national security concerns from the U.S. to the Soviet Union.