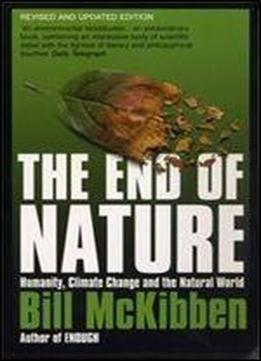 What McKibben says is as relevant now as it was when "The End of Nature" was first published in 1989. More than simply a handbook for survival or a doomsday catalogue of scientific prediction, "The End of Nature" is a ground-breaking plea for radical and life-renewing change. McKibben argues that our view of nature, its role in our lives and consciousness, has irretrievably altered. "The End of Nature" argues passionately that if the world is to survive, we have to rethink this relationship. For this new edition, Bill McKibben has updated all the statistical information and written a new introduction which sets out how much has changed - both for better and for worse - in the last fourteen years.