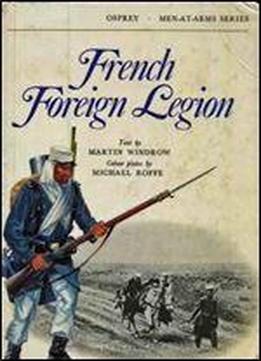 It is arguable that no group of fighting men in the history of European arms has been so misrepresented by ill-informed publicity as the French Foreign Legion. Though initially conceived in 1831 as a means of drafting recently discharged foreign soldiers to Algeria, the Legion has developed into a sophisticated force of motorized infantry, airborne troops and light armor. In this book, acclaimed French Army expert Martin Windrow examines the history and uniforms of the French Foreign Legion, from its service in the Carlist War of 1835-36 to World War II and beyond, debunking many of the prevalent myths surrounding this formidable force.