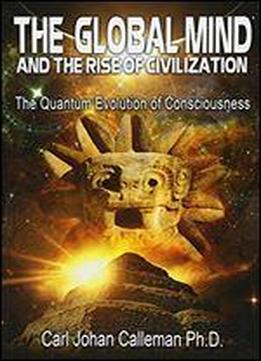 The Global Mind And The Rise Of Civilization: The Quantum Evolution Of Consciousness
by Carl Johan Calleman / 2016 / English / EPUB

How the global mind drives the evolution of both consciousness and civilization Explains how our brains receive consciousness from the global mind, which upgrades human consciousness according to a pre-set divine time frame Reveals how the Mayan Calendar provides a blueprint for these consciousness downloads throughout history Examines the mind shift in humans and the development of pyramids and civilization in ancient Egypt, Sumer, South America, and Asia beginning in 3115 BCE In each culture the origins of civilization can be tied to the arising of one concept in the human mind: straight lines. Straight and perpendicular lines are not found in nature, so where did they come from? What shift in consciousness occurred around the globe that triggered the start of rectangular building methods and linear organization as well as written language, pyramid construction, mathematics, and art? Offering a detailed answer to this question, Carl Calleman explores the quantum evolution of the global mind and its holographic resonance with the human mind. He examines how our brains are not thinking machines but individual receivers of consciousness from the global mind, which creates holographic downloads to adjust human consciousness to new cosmological circumstances. He explains how the Mayan Calendar provides a blueprint for these downloads throughout history and how the global mind, rather than the individual, has the power to make civilizations rise and fall. He shows how, at the beginning of the Mayan 6th Wave (Long Count) in 3115 BCE, the global mind gave human beings the capacity to conceptualize spatial relations in terms of straight and perpendicular lines, initiating the building of pyramids and megaliths around the world and leading to the rise of modern civilization. He examines the symbolism within the Great Pyramid of Giza and the pyramid at Chichn Itz and looks at the differences between humans of the 6th Wave in ancient Egypt, Sumer, South America, and Asia and the cave painters of the 5th Wave. He reveals how the global mind is always connected to the inner core of the Earth and discusses how the two halves of the brain parallel the civilizations of the East and West. Outlining the historical, psychological, geophysical, and neurological roots of the modern human mind, Calleman shows how studying early civilizations offers a means of understanding the evolution of consciousness.