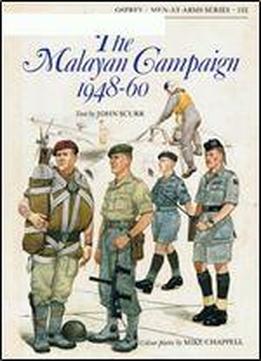 In June 1948 Communist insurgent forces commenced a guerrilla war to end British rule in Malaya. During the ensuing 12 years of conflict there were 8750 reported 'contacts' between units of the Security Forces and the Communist enemy. Eventually Malaya was made independent, and the British and their Commonwealth allies emerged victorious. Written and illustrated by infantry veterans of the campaign, this book examines the Malayan Emergency, detailing the forces involved and the harsh jungle conditions in which they fought. The text is complete with firsthand accounts from the contributors themselves and numerous illustrations depicting the forces' uniforms.