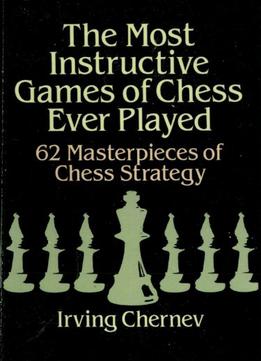 The Most Instructive Games Of Chess Ever Played: 62 Masterpieces Of Chess Strategy
by Irving Chernev / 2012 / English / AZW3

Here are 62 masterly demonstrations of the basic strategies of winning at chess, compiled and annotated by one of the game's most admired and respected writers. Each game offers a classic example of a fundamental problem and its best resolution, described and diagrammed in the clearest possible manner for players of every level of skill. As Irving Chernev observes in the Introduction, "Who will doubt the tremendous power exerted by a Rook posted on the seventh rank after seeing Capablanca's delightfully clear-cut demonstration in Game No. 1 against Tartakower? And who will not learn a great deal about the art of handling Rook and Pawn endings (the most important endings in chess) after playing through Tarrasch's game against Thorold?" Chernev's lively and illuminating notes on each game reveal precisely how Capablanca, Tarrasch, and other masters — Fischer, Alekhine, Lasker, and Petrosian among them — turn theory into practice as they attack and maneuver to control the board. Readers will find their techniques improving with each lesson as Irving Chernev dissects winning strategies, comments on alternate tactics, and marvels at the finesse of winning play, noting at the end of his Introduction: "I might just as well have called this collection The Most Beautiful Games of Chess Ever Played."