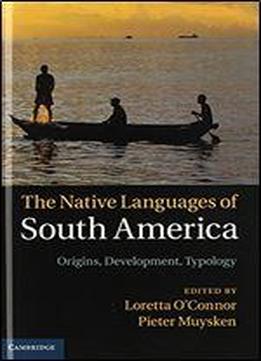 In South America indigenous languages are extremely diverse. There are over one hundred language families in this region alone. Contributors from around the world explore the history and structure of these languages, combining insights from archaeology and genetics with innovative linguistic analysis. The book aims to uncover regional patterns and potential deeper genealogical relations between the languages. Based on a large-scale database of features from sixty languages, the book analyses major language families such as Tupian and Arawakan, as well as the Quechua/Aymara complex in the Andes, the Isthmo-Colombian region and the Andean foothills. It explores the effects of historical change in different grammatical systems and fills gaps in the World Atlas of Language Structures (WALS) database, where South American languages are underrepresented. An important resource for students and researchers interested in linguistics, anthropology and language evolution.