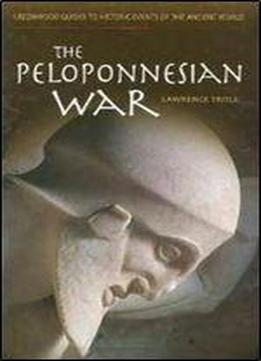 The Peloponnesian War resonates with contemporary events like few other episodes in ancient history. Though a democracy, Athens warred with its neighbors for decades in a doomed bid to secure its Aegean and Mediterranean empire. The ambitious city-state's eventual reward was defeat and tyrannical rule, effectively ending Athens's Golden Age, which flourished during the war in the fifth century BC. Not coincidentally did Athens flourish economically, militarily, artistically, and philosophically during the fifth century BC. Empire created great wealth, which supported the then novel democratic government. Wealth also supported the arts and letters. This was the time of Socrates, Plato, Aristophanes, Perikles and Thucydides, figures whose works and musings on war and its effects are widely read to this day. Designed as an accessible introduction to this immensely important event, The Peloponnesian War offers readers and researchers an appealing mix of descriptive chapters, biographical sketches, and annotated primary documents. An overview of the war is presented, followed a presentation of Thucydides' account of the war's causes. A look at the intertwined, some would say poisoned, relation of democracy and empire is offered, as are chapters on how the war was represented in plays, statuary, and pottery. The ethics of war are delved into by detailing the life, teachings, and eventual death of Socrates. And, critically, a chapter is devoted to those who most often suffer the harmful consequence of war: women. A glossary of terms is present, as is an annotated timeline, maps, useful illustrations, an annotated bibliography, and a thorough index.