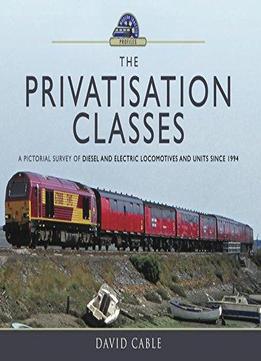 The Privatisation Classes: A Pictorial Survey Of Diesel And Electric Locomotives And Units Since 1994
by David Cable / 2017 / English / EPUB

Post Privatisation Diesels and Electrics is an album of photographs taken by David Cable, a well-regarded author of several books covering trains throughout much of the world.

This book looks at the types of locomotives and multiple units that have been introduced into the UK since 1994, when the government privatized British Rail into a series of privately operated franchises.

An incredible forty-one classes have been, or are shortly to be introduced, the majority being passenger units. The book shows these classes in a variety of colour schemes adopted by the franchisees.

Photographs, in the main, are taken in the South East of England, which is where the great majority of these new trains operate, with the surroundings being given as much prominence as possible.